Processing a Billion Row Dataset on an Inexpensive Workstation

It is interesting to consider the problem of processing large datasets given limited resources such as time and money. How to approach the problem? What is needed in terms of hardware? Is it expensive? Is it slow? In this post we will show how to do fast and reliable parallel computing of on a less-than-$1000 machine.

We will show that, using simple examples with correspondingly simple Python programs, it is possible to work in an agile way with datasets exceeding one billion lines. Two examples (details will follow):

We process data using the Accelerator, a tool released by eBay, that has its origins in a startup company running large data driven projects with limited resources. The Accelerator makes efficient use of available hardware, and many applications will therefore perform well on a standard laptop. A more powerful computer will execute programs faster and shorten design iteration time.

The Accelerator is a minimalistic framework with a small footprint that runs on anything from 32-bit Raspberry Pies to 64 bit multi core rack servers. One of many features is that it provides simple parallel processing that makes good use of modern multi core computer hardware. The Accelerator is programmed in Python, making is easy to use and get familiar with.

The Accelerator has been used in many projects, including being back-end for recommendation systems running live to millions of customers, since 2012.

Hardware for the Accelerator

What is a good hardware platform for data processing? As mentioned earlier, a laptop may do, but if we are free to choose our computer, which parameters are most important?

We believe that memories with error detection and correction (ECC) and file systems with integrity checking and redundancy (such as zfs) are necessary to fulfill reproducibility requirements. If we just want to play around with a dataset, this is not the first priority, but as soon as we start doing anything more serious, our results depend on reproducible computing. Data is a valuable resource, and any error in the data should at least be detected (and preferably corrected).

An Example: Recycling a Lenovo D20 Workstation from 2011

This machine is cheap, reliable, and powerful, and actually compares well to modern machines, which we will show in a future post. We bought our machine from an Internet auction site in order to try it out. The machine is actually from 2009, but the CPUs in our example were manufactured in 2011. 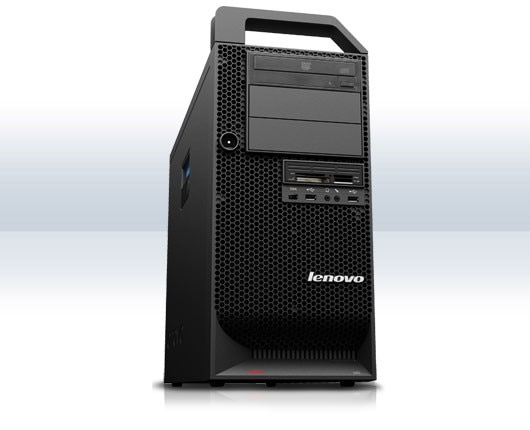 The workstation is equipped two CPUs providing in total 12 cores (24 “threads”), has 108GB RAM, and 2TB solid state disk. Approximate price for a machine like this is below $1000.

Despite its age, this machine outperforms modern laptops, mainly because it has more cores, less problem with heat dissipation, and three independent memory channels per CPU chip that speeds up memory accesses.

Clearly, this machine, in its current configuration, has too little disk for data heavy applications, but there is room and connectors for eight drives in the box. We have measured the disk controllers to transfer data at a sustained rate of 265MB/s between memory any of the SSDs. (Using more SSDs in zfs raidz configuration, we have measured continuous writes exceeding 1.2GB/s.)

The Accelerator installation repository comes with a simple performance testing script that we have used for the testing. The details can be found on page 3 of this document, and the code is found on github.com/eBay. The test will create a dataset of one billion lines, and is composed of several columns with random data of different types. This dataset will be read, written, and processed in different ways while execution time is measured.

The size of the one billion line dataset is 79 GiB (36 GiB compressed).

Here is the complete output from the build script.

The majority of the execution time is spent in generating the synthetic dataset CVS file that is later used for testing, while 1113 seconds (less than 20 minutes) are used to import the dataset and perform the actual tests. During the tests, the one billion dataset is read and processed in various ways multiple times. Total execution time, including data generation, is less than one hour (3235 seconds). Let us take a closer look at what happens during testing:

The script starts by creating a one-billion line dataset in the Accelerator’s internal dataset format. All this data is then fed to the csvexport method that writes it to a compressed CSV file on disk. Generating this file takes about 11 minutes (687 seconds), and runs at a data rate of almost 1.5 million rows per second, or 115 MB/s. The resulting output is a 36GiB compressed CSV file.

The CSV file is then imported again using the csvimport method, followed by typing of the data using dataset_type. Importing runs at 1.7 million rows per second while typing runs at 3.1 million rows per second. (The typing jobs continuously process about 250MB/s.) The time spent importing and typing the data corresponds approximately to a coffee-break. To be specific, it takes 15 minutes (913 seconds) to import and type the complete dataset.

When imported, the dataset is ready for calculations. The testing begins with adding all values in single columns together. The test result highlights the difference in speed between different datatypes. For example, the Accelerator adds 230 million Gaussian distributed 64-bit floats per second. The “small integer” dataset has less entropy and therefore runs slightly faster, 317 million rows per second. Note, these numbers are for a program written in Python operating on data on disk!

There are four main reasons for this high performance.

This test adds a data dependency. Numbers are added only if they are positive. These tests are significantly slower, but still they consume data at rates between 50-100 million lines per second.

This part uses the Python Counter class to store distributions of each data column. Although it uses a very high-level language construct, it runs at more than 20 million rows per second, creating a histogram of a billion 64-bit floats in about 45 seconds!

Check for existence of a four character string in a billion random strings of length 10. This runs at a rate exceeding 80 million rows per second (i.e. 800MB/s). (The number of strings found is less than one in a million, which is in line with theory.)

Assuming the input data was available on disk in a CSV-like format, importing the data and running all the tests took less than 20 minutes, where each test took between 3 and 46 seconds. Total execution time, including generating the one billion line dataset, was close to one hour. On a faster machine, execution times will be even lower.

The Accelerator can handle large datasets at high speed on inexpensive hardware. Being able to create a histogram of a billion values in less than a minute (45 seconds) is a great advantage in any data science application. (Full disclosure: an import of the complete dataset takes 15 minutes, and this has to be carried out first, but only once.) For reasons like this, the Accelerator is an ideal framework for a lot of data intensive applications.