Being Reproducible:
From Input Data to Result and Back

The Accelerator eliminates the need for manual naming and book keeping of intermediate results and dependencies. Instead, it stores all job input, code, and output to disk, and provides a simple system to look up any pre-computed job. This storage and retreival of job information may be used to build complex job dependencies that are transparent, straightforward to validate, and reproducible.

A key feature of the Accelerator from eBay is its build system and the way it stores and keeps track of all programs executed and their corresponding output. A design goal of the Accelerator is to provide transparency and reproducibility, to any project. While these are main features on their own, the design also reduces the risk of making manual errors, while typically speeding up execution times, both in the development and deployment phases.

The improvement in speed is because the Accelerator ensures that the same program can not be executed twice on the same data. If a result has been computed before, it will be re-used instead of re-computed. (Another, unrelated, reason for the Accelerator to being fast is that it provides a parallel streaming data interface that it is embarrassingly simple to write parallel programs around, in plain Python.)

Data processing is “from left to right”, starting with input data end ending with output results. In between, any intermediate or temporary storage is written (and read back) to a dedicated space called the work directory.

All intermediate data associated with what is stored in the result directory can be examined in detail using the Accelerator’s board web server. The Accelerator has always provided transparency, and the board server makes it easy to observe jobs, files, source code, datasets, dependencies, and more using a web browser. The board web server is the topic of an upcoming post. 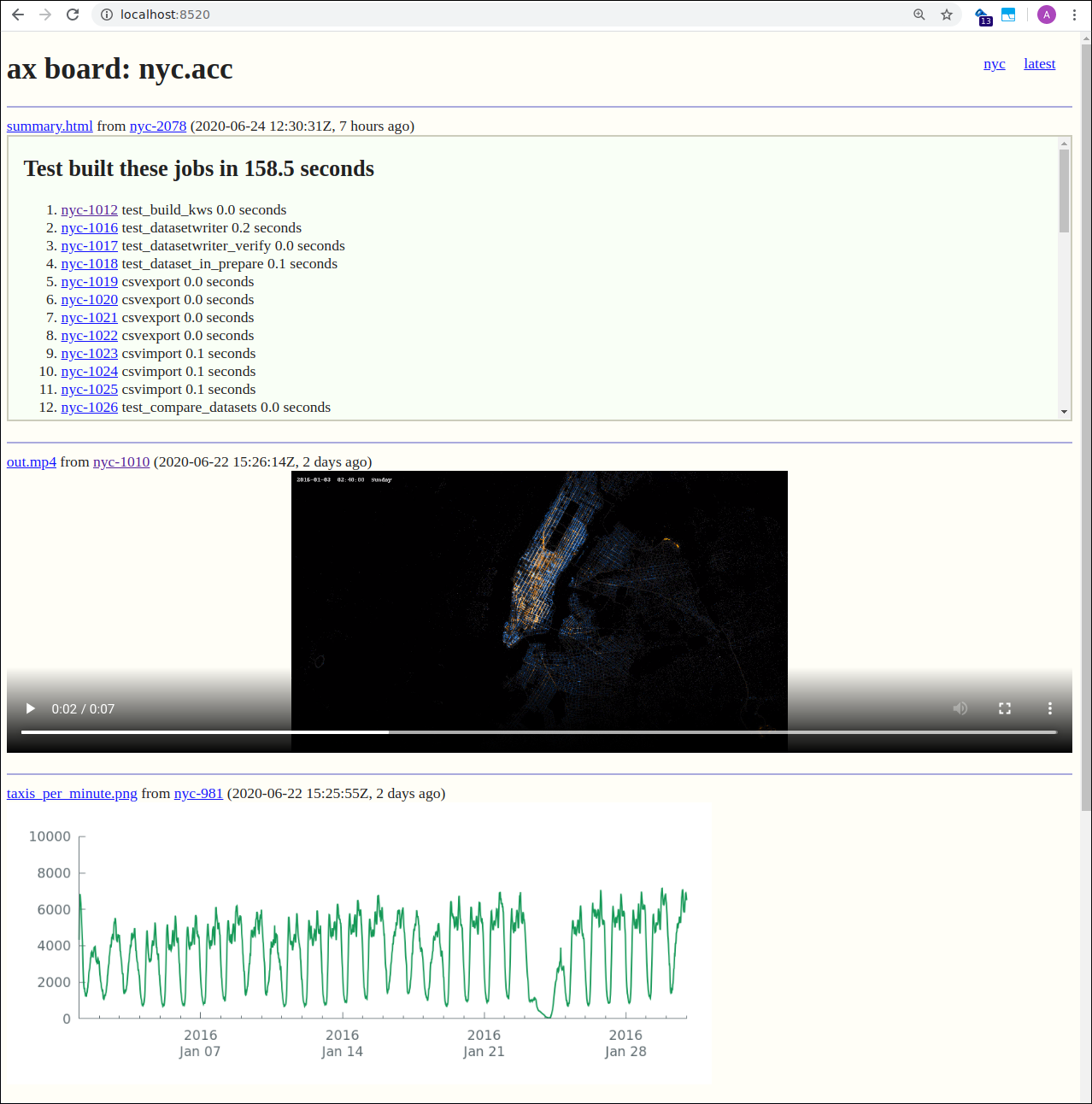 This post explains how the Accelerator’s build system is designed to map input data, source code, and results together. But first we’ll take a tour of common problems and solutions.

Let us start with the basics. Typically, a data science task is about creating some output from a data set, like this

The output could be some insight in form of a graph or number, some kind of model of the data, a subset of the data, or something else. It does not matter what it is, the point here is that the result is a function of the input data.

Conceptually, the output is created by a program acting on the input, something like in the figure below

From the image, it is obvious that the result does not only depend on the input data, but also on the actual program used to generate the result. If the program takes input options, the result may depend on these as well.

We also note that it takes some execution time to generate the result from the input data using the program. If the program runs fast and the dataset is small, this is perhaps not a big issue. (A classic solution to keep track of the process from input to output is to use a Makefile. When the source code is updated we can update the result correspondingly by running make.) But if the program runs for a longer time, development cycles will be longer and results will be more valuable since it takes time to generate (and perhaps re-generate) them. Therefore, it makes sense to store all computed results and associate them with the source code and input data that was used to generate them.

Development and debugging of a program becomes increasingly difficult with larger datasets and longer execution times. To overcome the issue of longer execution times, it is common to use an iterative approach. The program can typically be split into different parts, where input to one part is the output of another, like this.

The main benefit here is that once we’ve developed and debugged program1, we can store its output on disk and concentrate on the development of program2 without running program1 again. Assuming that writing and reading the intermediate storage is fast, this may save a considerable amount of execution time.

Another benefit might be that the output data from program1 may be used for several applications, so we can fork different sub projects from the output of program1 instead of starting over with the input data file again. If program1 does some data preprocessing or cleanup, for example, this makes total sense. In fact, we probably want to ensure that the same preprocessing is applied to all our sub projects. “Don’t Repeat Yourself”.

The Problem of Versions

While program partitioning, as shown in the previous section, is a common approach that seems simple enough, it is actually a potential road to trouble. Why is that? Because it usually does not take long before we have a situation like in the figure below (or even more complex)

In total, we now have three different results. There are several potential problems here, for example (tick the ones you recognize):

It seems we have to remember or manually keep track of which result that belongs to which version of the code. This does not scale well, not with complexity, and not over time, since we probably forget what is what after a while.

Apparently the approach is not transparent, not necessarily reproducible, and since it relies on human book keeping it is definitely easy to make mistakes.

As we’ll see next, the Accelerator’s build system provides simple solutions to these problems.

The approach taken by the Accelerator is simple and efficient.

The Accelerator has the concept of jobs. Everything related to a single program run, all inputs and outputs as well as the program itself, is collected and stored in one place for reference and transparency. This is called a job. The concept of jobs ensure that any intermediate files in a project are tied to the job that created them.

Jobs can only be created, not modified or erased, by the Accelerator. Furthermore, they can only execute once. When a program completes execution, the Accelerator returns a Python object that contains references to all data related to the job. The returned Python object can be input to new jobs, creating dependencies, so that they can make use of the job’s data. Dependencies are clearly stated in the jobs’ metadata, and are thus fully transparent. Below is a simple example.

Some files (such as diagrams, toplists, movies, et cetera) in some jobs are more important and considered to be project results. These files can be made accessible from the result directory using soft file system links. Here is a simple code snippet for demonstration

This so called build scrip first executes myprogram, and then links the generated output file theoutput.txt to the result directory. No files are stored in the result directory, it will only contain soft links to files located in jobs. Links provide transparent pointers to the jobs that created the resulting files, whereas a plain file copy does not.

The input directory keeps all input data files. All jobs are stored in the work directory as plain files - a filesystem is a database too, and one that is easy to inspect! And finally, major results are linked to the result directory.

By looking at a link in the result directory, one can directly see which file inside a job directory that it points to. Inside this job directory is the source code that was used to generate the file, along with references to input data and other jobs that were used to process the data. Following all links backwards will unwind the complete processing graph, independent of how complex it is, all the way back to the input data. For each job, source code and options can be extracted too. Using the Accelerator, there is always a 100% transparency from output to input.

All jobs leading to a link in the result directory, as well as their properties, are easily browsed using the Accelerator’s board web server.

So What Exactly is Stored in the Job Directory?

In practice, when a new program is run, the Accelerator creates a directory (called a job directory), which is populated with files covering all information that relates to the program run. The first things that are written in the directory are files contain meta information about the job. Thereafter, any files written by the running program as well as the program’s return value and print strings is stored in the directory. Thus, the job directory contains among other things

Thus, a job directory contains everything needed to run a specific program with a particular set of input parameters and data references. And also everything output during the program’s execution, including temp files, print-outputs, stderr-messages and return value.

Note that jobs can only be built once. For every build-call, the Accelerator checks if there is a corresponding job already built. If there is, the Accelerator will immediately return a job object containing references to the job. This job object looks exactly the same as the one returned the first time, when the job was actually built.

The Accelerator finds pre-built jobs in an instant, because each job stores a hash digest of the job’s source code. The hash digest together with input parameters is a unique identifier of a job.

If a build script is fetching pre-built jobs instead of building new ones, it actually validates all processing from input to output. A re-build, on the other hand, is a sign saying that something has been modified since last run. Storing and looking up jobs saves time while ensuring transparency and reproducibility. So re-use, don’t re-compute.

The Accelerator from eBay is designed for fast processing of large datasets on a single machine. Programs are simply written in Python, and thanks to its fast parallel processing and clever reuse of pre-computed results, execution times are typically in the range of a few seconds per task. Therefore, ideas could be tried out with very little overhead, making the Accelerator a perfect tool for fast exploration of large datasets.